'A Drop of Golden Sun' : The Sound of Music in Nenagh

A crazy planet full of crazy people,Is somersaulting all around the sky.And everytime it turns another somersault,Another day goes by.


The enduring  appeal of Rogers and Hammerstein's final musical was  reaffirmed as the CBS Hall  was packed nightly with young and old for Nenagh Choral Society's splendid  production of the The Sound of Music.

Swanky theatres are all very well but there is something magical about seeing these  functional comunity spaces transported  for a time, to a theatrical realm where the local  players  sparkle  as their grease painted alter egos. The vivid colourful sets instantly  evoked the Austrian Alps and  we also loved the church panels with their stained glass effect windows.


There were strong performances from all the leads. Maria is such a goody goody, that usually I want to scratch her eyes out by the second scene but Emily Sheary carried off the saccharine role beautifully, imbuing her with a feisty quality .  Louise Cormack as her upper crust rival was delightfully supercilious and Patrick Rohan Jnr as the expedient freeloading Max was the antithesis of  Paul Shesgreen's   aloof, principled Captain von Trapp.  Mother Abbess, Niamh Chadwick delivered the central message of following your dream with suitable gravitas. The supporting characters squeezed every nuance from their parts. The pit vote for best supporting role was Alan O Brien  who made band members chuckle every night as the pompous, guffawing Admiral von Schreiber. Director Greg Browne ignored W.C Field's advice and includes not only nine confident youngsters in the cast but also a dog  adding an extra frisson to   the torch bearing  'Nazi' stormtroopers parade through the audience.

Some of the best singing came in the well balanced acappella liturgical numbers and the Salve Regina near the Act 1 finale was particularly fine.  There was an extra vocal treat with a chorale by German composer Biebl was inserted  in the concert scene for the impressive  young baritone Dylan Rooney  in the role of the Gauleiter Herr Zeller. One to watch out for with good stage presence to match his vocal ability. I enjoyed  the less familiar trio No Way to Stop it, some of the witty lines of which are quoted above and which is often cut from stage set list and doesn't feature in the film version. 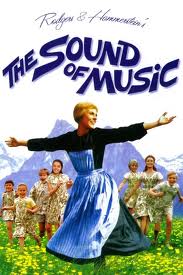 A full string quartet with double bass added an unusually  rich string timbre under musical director Laura Kearney.  Being part of the  band and seeing the show come together in the final stages gives some  sense of what an immense combined effort, an amateur musical production is.  Chairman Ger McCarthy and his  tuxedoed team were front of house every night with a warm greeting for patrons as they came in from the biting cold.  With an intergenerational cast there was a particularly strong sense of community in this endeavour as so many elements combined to bring audience members to their feet  each night at the close for a rousing sing along of the final chorus.  This show is ingrained as part of our childhoods and  for the many children, who came to see this heart warming  production, to paraphrase the lyrics of one of Maria and the Captain's lovely duets 'somewhere in their youth or childhood, they will have seen something good'.


Looking forward to final perf. of terrific production of Sound of Music production from @nenaghchoral#Tipp 'Something Good' for all ages
— Fidleir (@fidleir) March 23, 2013