Limey Lords a Leaping: Me and My Girl in Ennis 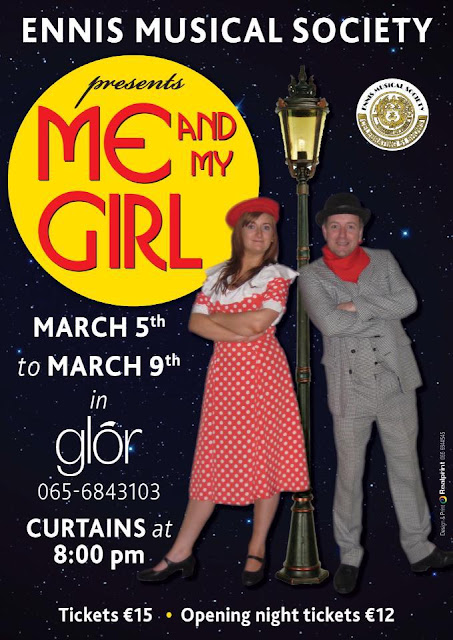 Everyone is doing the Lambeth Walk on the Causeway this week as Ennis Musical Society present the 1930's morale booster, Me and My Girl for their 60th anniversary production. Tapping into the current penchant for toff TV, Downton Abbey, the show, a  gender reverse take on Pygmalion is the frothiest, lightest theatrical confection, a good old fashioned song and dance show  full of catchy tunes, corny jokes and lashings of lively dance routines, delivered with brio  in glorious tecnicolour by the Banner society . Hard to believe that cast and chorus members were  busy with all sorts day jobs before taking to the boards for the evening.

Brian Henry as Bill is an exuberant song and dance man in the best music hall tradition . Mary Healy  as Lady Jacqueline is delightfully OTT as his blonde bombshell comedic foil.  Tony Murray steals a scene dispensing advice as the doddery old family solicitor, Pargeter. Lauren Dunne as feisty heroine Sally shines in the wistful 'Once You Lose Your Heart' . The riotous company numbers are the ones that most cheer the heart  beautifully choreographed by Barbara Meany. Musical director Shane Farrell  keeps the tempos bright and breezy and  The Lambeth Walk was a  rumbustious delight. Is there a more cheerful and amiable song than The Sun Has Got His Hat On staged as a Lawn Tennis and Croquet party romp in eye socking whites and marine blue costumes?

The nine piece pit with full brass and reed section had a terrific big band sound and the percussion added all sorts of bells and whistles I have never heard in a live band before. Pit  pianos are very often  filling in for missing parts but in this score the old joanna  is essential  to evoke that cockney knees up vibe though I missed a bass  part to add more bottom resonance.

Ticket prices were a modest €15 and this was great value for a  production which gave no sense that values were pared down in line with recession. How fantastic to see musical theatre alive and thriving on our doorstep in Clare. In the last few weeks alone there has been no need for a trip to the West End to see lively entertaining productions as both Ennis and Shannon societies mounted excellent productions .

Robert Lindsay A snatch from the 1986  London production

Venue Notes
Amateur societies and their following  aren't usually  in any hurry to clear the house and the meet and greet time after the show is important. It was a pity that no teas and coffees were available in the foyer following the performance .

The programme notes thoughtfully included printed lyrics to facilitate a closing sing a long. Great idea but the house lights need to come up for it to work.