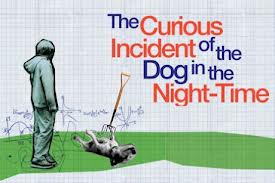 Apparently there was some sporting event also on  in London last weekend. Despite this, the South Bank was, as ever, choc full of  arts events; exhibitions, live acts, and top class drama in the National Theatre.

The smaller of the three theatres in the complex,  the Cottosoe,  had as it's offering The Curious Incident Of The Dog In The Night-Time. The play only opened last weeks and is  a staged version of the Mark Hadon book from 2003 adapted by Simon Stephens.

The play adapted by Simon Stephens  was staged in the round. Well, a rectangular floor space filled with squares that light up with mathemathical formulaes and pathways that signalled the mind of the protaganist.

The play kicked off with the killing of the dog in that  curious incident and the plotline soon drifted from what you might expect from  the title. Whilst the dog was definitely dead the corpse wasn't gory enough for my taste. After all it was brutally murdered, wasn't it!!

The key role of Christoper was played by Luke Threadaway and he was superb in the demanding role which required a defined range of emotions. The story was delivered partly through a narrator  with the storyteller played by Niamh Cusack who doubled as Christoper's teacher and the one  who understood him most.  The work  was directed by Marianne Elliott who codirected the huge hit War Horse.  Paul Ritter in the role of the father brought a great sense of controlled emotion that echoed with Christoper's affliction.
There were some terrific theatrical devices used to support the action and I particulary liked the ensemble vividly creating an intercity train and a Tube station with virtually no props.
The narrative moves swiftly from Christoper setting out to investigate the crime of killing the dog and soon develops into an exploration of his world and how he encounters death, break-ups, truth and lies and the trauma of moving from a familar environment. The ending was a bit too twee for my taste and rounded off with a manipulative device intended  to deliver one of thos 'aaah' moments. A fine production and it is sure to run.

The Venue
The National Theatre offers  'day tickets' from 9.30 am each day and if all seats are filled you can often pick up a standing position. In my case  I secured a £5 ticket. Hard to find fault with that. In a  nod towards innovation the National Theatre is broadcasting the show live to UK cinemas in September.
Outside there were huge crowds for a vast range of free entertainment and dining opportunities on the banks of the Thames.

Posted by Cathy Desmond at 2:07 PM

Email ThisBlogThis!Share to TwitterShare to FacebookShare to Pinterest
Labels: London, Luke Threadaway, Mark Hadon, National theatre, The Curious Incident of the dog in the night -time