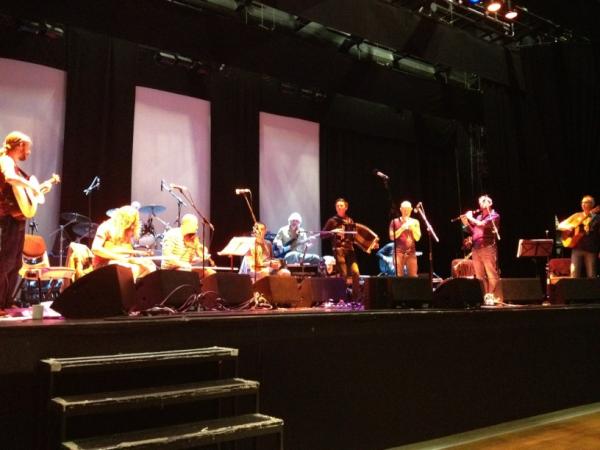 It is refreshing to go along to a gig where the music is so newly minted that you have no idea what sounds will be created with no recording or YouTube clips available  to preview the performance, The blurb suggested a pan Celtic ensemble with a bit of poetry thrown in. They may have had a diminuitive title but the fourteen members of  Dán spread out to fill the large Glór stage last night to form an impressive large  ensemble. The group  it appears are an amalgam of three groups from Ireland (Guidewires), England (Kan) and Brittany (The Breton Quartet) augmented further by a  Scottish female vocalist Alyth Mc Cormack .  The result  was a sort of spicy musical bouillabaisse with jazz and traditional  elements, a dash of tango over a base of  a counterpoint of minimalist instrumental riffs .

The line up featured drums and bass guitar, two fiddles, two flutes, four guitar plus bazouki, concertina , accordion. I was reminded of Andy Irvine's Mozaik experiment with the Balkan cross rhythms and changing time signatures and also Penguin Cafe in the scale of the ensemble and the approach of layering musical patterns. While there was great energy in the whole ensemble segments, I enjoyed the smaller more flexible groupings .  Lively Breton box player Janick Martin  had a  pivitol role at the centre flanked on either side by twin flute and fiddles .  The occasional  poems worked very well  recited by McCormack with rhapsodic accompaniment from the reduced ensemble, Tola Custy's violin melodic line fitting very well with the meter of Theo Dorgan's maritime poem. In contrast,  the first half included a poem by Northumbrian poet Tickell, on a coal mining theme. All in all it mostly worked very well , sometimes hitting rich veins  and was never less than interersting .  There were some well known faces in the audience including  fiddler Siobhan Peoples and flautist  Kevin Crawford of Lúnasa. Dán will play at the National Concert Hall tonight (Thursday),  as part of Fleadh Cheoil in Cavan on Saturday and at the close of  Kilkenny Arts Festival on Sunday

**It would have been pleasant to linger a while at this convivial venue after a novel musical venture to guage reactions but sadly there was no post show mingling of performers and listeners.  Perhaps it was the lack of  the imperative of a CD to sell or  pressure of a gig at the NCH next day but no musicians came front of house following the perfromance.  As in UCH Limerick, the bar was closed and patrons left fairly promptly.