Opera Theatre Company's latest production offered us a  modern take on the  strange and beguiling world of early Baroque opera .  The Greek myth of musical Orpheus and his  journey to the underworld to retrieve his beloved nymph Eurydice has kept composers busy for centuries but it is thought that no composer harnessed music to chart the emotional turbulence of young blighted love  better than Monteverdi. His Orfeo  is regarded as the first important work in the opera canon born in the Renaissance mindhives of the 17th century Florentine camerati .  Sadly there are resonances in current news headlines with the theme of happiness of young newly weds tragically  cut short in idyllic surroundings.
The historic Theatre Royal, Waterford seemed just the right sort of venue to hear a rare, ancient opera and the foyer was buzzing with anticipation on Saturday night as local aficionados,  critics and figures from the national theatre scene gathered for the opening night of the nationwide tour. This was quite the best dressed audience I have seen at the theatre in a while. 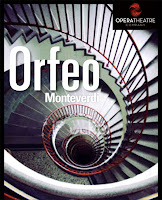 Sung in an English translation to the original libretto, the singers were accompanied by a seven piece period ensemble led by Andrew Synott.  I was intrigued by the sound of the cornettos  and the note of menace  evoked by the hurdy gurdy like regal.  The gentle sounds of the harp and theorbo were heard clearly with the musicians comfortably ensconsed in one of the exposed wings rather than the sunken pit.
The staging under director Ben Barnes was very interesting.  This was a youthful cast The golden couple looked radiant in the cream wedding attire but I was a bit baffled by the 'smart casual'  first act costumes. It seems that into each show some rain must fall  and the evoking of tears with a profusion of umbrellas and the emptying of a watering can on the prostrate  messenger wrung  giggles rather than tears from the back row of the balcony . Hades was a WW2 concentration camp and the journey back from the underworld was via art deco hotel elevator presided over by  baritone Padraic Rowan in natty red bell boy costume . There was a run on programmes in the interval as patrons brushed up on the mythic plotline. The programme notes were excellent with substantial articles on the context of the work in addition to the usual items. 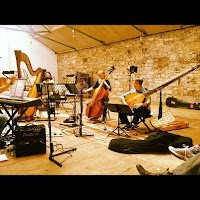 There were several remarkable performances that stood out. American tenor, Oliver Mercer  in the title role was everything you would want in an Orpheus, a beautiful voice in a style quite different from a bravura tenor of the Romantic tradition.  Swedish contralto  Karolina Blixt was enthralling . Her low contralto tones reminiscent of Kathleen Ferrier were chilling as the Messenger , bearing bad tidings.  It was good to see Clare tenor, Peter O  Donohue another singer from Archie Simpson's stable in the cast and Ferghal Curtis was impressive  in the role of Apollo in his professional debut. The foyer ladies choice for best man though was American bass Matthew Trevino for  a powerful voice, great stage presence and real air of malevolence  about him  in the role of Pluto.  Irish sopranos Sadhbh Dennehy  as Musica and Eurydice, Daire Halpin as  Proserpina  completed the impressive cast.

Among the attendees were Professor  Eric Sweeney who conducted the Dublin premiere of Orfeo in 1974 when it was presented as part of Dublin Theatre Festival at Christchurch Cathedral  to great critical acclaim.

We very much enjoyed this  production and at €30 a head it was terrific value for a top class production in a beautiful venue. There was great sense of occasion and the evening concluded with a convivial reception in the foyer with the artists present to meet and greet. While there is much angst about the lack of an opera house in the capital, I am much more concerned that we continue to enjoy excellent touring productions  in the provinces in the many underused  arts centres around the country. Even if Baroque Opera is not your cup of tea, this production is very well done, worth seeing and deserves to be supported . Tour dates here

listen to ‘Padraic Rowan Baritone ’ on Audioboo
My favourite moment from the opera.


OTC's staging was more understated in contrast  than the very Gothic one here with a baritone in the role
http://www.youtube.com/watch?v=ZFe-xH7bblQ

My review of Lismore Music Festival Barber of Seville