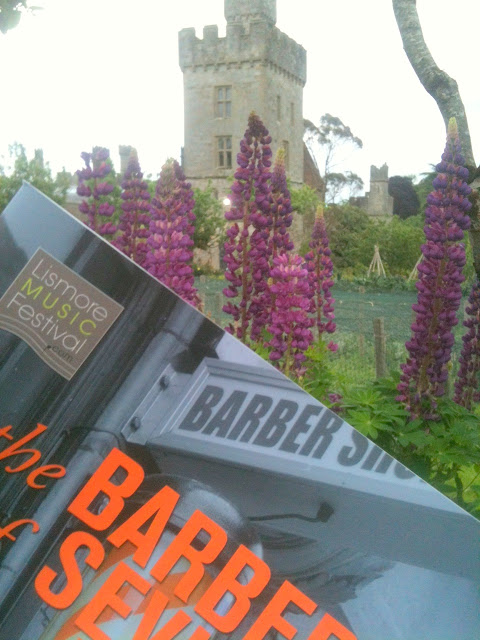 Ah June- that magical  pre-exam time of sunshine and balmy evenings. Perfect for picnics  on the lawn and putting a tent up in the garden. So to Lismore Music Festival in the enchanting Blackwater Valley, Co Waterford for an evening of sparkling Rossini in the Castle Grounds.  Turning off the main road at Cahir, the drive  to Lismore through the Vee Valley in the Knockmealdown Mountains was magical with a clamour of purple rhodedendrons in full bloom lining the route .

With a relatively late start of 8.30 pm,  presumably to better facilitate the die-hard picnic brigade and to allow changing natural illumination, the festival  production of The  Barber of Seville commenced in the canopied disused stable yard in the grounds  of Lismore Castle.   The large cast was well chosen with petite Rosina, Pervin Chakar nicely matched by Almaviva played by Puerto Rican tenor Javier Abreu. Star of the show in the title role was  Limerick baritone,  Owen Gilhooly who commanded the stage in every respect from his hilarious arrival on baby blue vespa scooter even adding his own sympathetic guitar accompaniment  in the balcony serenade. Sandra Oman  almost stole some of scenes in her role of Berta, a  perky bar maid  and there was much slapstick jocularity particularly in the final scene before slimy Dr Bartolo (Damon Nestor Ploumis),  inevitably took a dive in the fountain at the finale. Other Irish singers included Gerard O Connor as Don Basilio and Mark Duff as Fiorillo. The device of having
the recitatives in English with the arias sung in Italian worked very well and eliminated any hankering after surtitles. There was a very fine seven piece on stage instrumental ensemble led from the harpsichord by David Adams even if the outdoor acoustic was inevitably not too kind to strings.

I note that director Dieter Kaegi spent ten years at the Aix en Provence Festival helm and the experience had many elements in common with a visit to Theatre l'Archeveché , the existing structures of a historical building integrated into the open air set. Here the shabby stable doors  and courtyard fountain
perfectly evoked a provincial  town piazza. It differed  in one  respect however -the temperature.   Sadly it wasn't just the quality of the performances that sent shivers down our spines as Lismore Music Festival 2012  was not blessed with fine weather although the capacity Sunday night audience were spared the downpours that dampened  Saturday proceedings.

Maybe it was this aspect of the evening that reinforced my ambivalence about the al fresco opera experience. Opera in the Open in a Dublin Civic space appealed  to me because it made a daytime opera experience easily available and accessible to lots of people who wouldn't normally attend . With a surfeit of well appointed theatres  and  a defecit of events to fill them  in driving distance of Lismore, does it make sense to mount an expensive  production in an outdoor space heavily reliant on an aspect of the production you can't control,- the weather? While I  found this production to be thoroughly engaging and great fun with  fine ensemble singing and acting and some  remarkable individual performances , one couldn't say the evening was very comfortable. Opera began in the homes of the Florentine aristocracy but at Lismore, there was a sense that we could play in the garden but not in the house as no part of the tantalising  interior of the splendid  castle was open to us for any part of the evening apart from the entrance courtyard.

Nevertheless, the 2012 LMF production of The Barber of Seville was  one of  great flair and imagination and cast &crew fully deserved their standing ovation  from a full house at the close .Next year's production  is the Mozart's Magic Flute and the programme  is extended to include recitals at Salterbridge,  Cappoquin  and Tourin Houses.  I am looking forward to seeing LMF develop in this beautiful and under rated part of the country.

Posted by Cathy Desmond at 8:23 PM