In my last post, I reported from  the balcony of Sweden's Royal Opera House as I watched the  Carmelite sisters  marching to the guillotine in Poulenc's setting of a dark revolutionary tale. This week I was in the pit of Glor theatre Ennis in west Clare for more nuns' choruses but it ended rather more cheerfully with the von Trapps escape as the Ennis Musical Society mounted their second production of The Sound of Music after a gap of twenty years. I really enjoyed playing for this production. The Rodgers score is richly scored for the middle  string parts and with full houses almost at every performance there was a great atmosphere as friends and family gathered to support the performers.

There was much to enjoy from Audrey Banks opening solo plainchant Dixit Dominus to the the mother abbess' Deirdre Browne's closing anthem Climb Every Mountain. Ken Shaughnessy gave Max  an edgy quality as the expedient concert promoter and Edel Heaney imbued the baroness with a degree of pathos that she almost made you feel sorry for her. Barry O Loughlin was suitably sinister as the Gauleiter and Geraldine Westwood wrung every bit out of her cameo role as second prize winner at the Kaltzberg Festival.  Of couse the youngsters stole the show but how lovely to see proud mammy Edel Bluett making her musical society debut among the novices in the ladies choir, mother of Adam(Rolf)  and Nathan (Kurt). 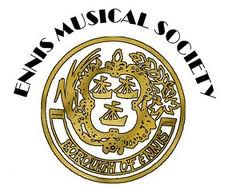 There was an added piquancy for some in the audience as former cast members came to relive their stage experience of two decades ago . Sheila Bunce from Clarecastle was an erstwhile Maria while Anna Monaghan a former mother abbess was on hand nightly to serve as prompter and  it was lovely to see president Ita O Shea in the audience who told me that she also played the role of mother abbess during her long career. The audioboo features patrons and musical society stalwarts, Aidan and Anne White from Shannon.