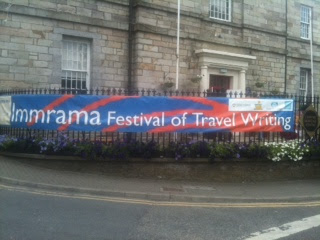 
Lismore had a sleepy air about it on Saturday morning but a good crowd were assembled in the ballroom of the historical Lismore Arms for the blogging workshop with  presenters from a range of media.  After a hasty discussion on the choreography of the session,  Manchán Magan after a brief declamatory  introduction  handed over to guest celebrity blogger, vagabond  and adventurer Rolf Potts. 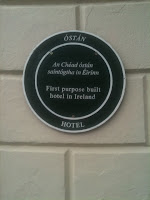 Potts showed  some of his wild adventurous blog videos on the big screen and gave an overview on the rise of the travel blogger and mentioned the main players.  Suitably rugged,  Potts cut an unassuming figure and made way for Irish social networking supremo, Darragh Doyle of Boards.ie who gave an  overview of the  bewildering plethora of social networking tools available.  Doyle’s passion and enthusiasm for his area of expertise permeated the morning and he explained well the potential of blogging and addressed some of the concerns of social media virgins with a wry and self deprecating humour.
The final contributer was Áine  Goggins of TG4 who presented some segments of her TV  programme Tholg go Tolg where she' couch surfed' throughout Europe whilst  filming her adventures. The clip of her meeting the German grandparents was  very authentic and rather wonderful and what a useful aid her concertina proved .  I couldn’t help but feel somewhat nostalgic as they leafed through  an old photo album.  Will such an activity be a redundant in a computer screenage where we print our photos less and less?  Of the various topics discussed, it was the  couch surfing phenomenon which most seemed to engage the interest of the group.

There was a brief discussion on monetising your blog via links and selling adds.  Canoeist, Jasper Winn, from the floor reported his success in targeting a particular sponsor
Conflicts in the interface between published writers and bloggers was in the air.  With much talk about ancient Greece on the airwaves this week, my thoughts strayed back to the Greek travel writer Herodotus with his quirky reports and anecdotes ticking many of the dos boxes of modern  travel writing gurus and Potts, known to quote ancient Greek philosophers himself reminds us that travel writing is about telling stories.  And the couch surfing hosts surerly epitomised the   Classical Greek culture of being hospitable to strangers lest one should be a God in disguise.