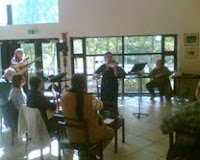 This afternoon I was delighted to be invited to be guest musician at the monthly gathering in Glor of the Clare Three-Legged Stool Poets. One of the special guests was poet Brendan O Beirne, a prolific writer who read movingly from several of his many volumes. There were contributions from the floor at the open mic with a very interesting performance from Patrick Stack who added an oboe to the sound effects for his dramatic contribution. I interspersed the spoken word with selections of Irish airs, beginning with the Coolin and closing with a medley of tunes used for settings of poems by 20th century Irish poem . Fred Johnstons' accompaniment was very sympathetic no more so than in Jay Ungar's Ashoken Farewell . Limerick based poet Dominic Taylor also guested and read from his sometimes very humourous work

A visit to the group is a great way to spend a Saturday afternoon. Again I was struck by the sense of collegiality among the poets . The group resumes on the third Saturday in September and anyone is free to come along at any stage in the afternoon and leave at any point. It is not mandatory to contribute from your own work
Posted by Cathy Desmond at 10:46 PM

Email ThisBlogThis!Share to TwitterShare to FacebookShare to Pinterest
Labels: music and poetry