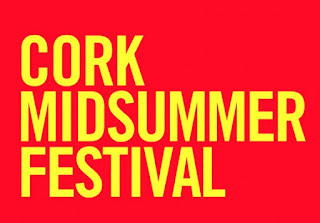 I spent a day  at the Cork Midsummer Festival recently . My review focusing on the concert performance of La Traviata at Cork Opera House appeared in the Irish Examiner  I had a lovely day and enjoyed the mix and spread of events, from early to late, most of them free.

I didn't have room to refer to spoken word events . I caught two of the stages of Kevin Barry's Crosstown Drifts, a series of readings by various writers including Barry himself.  The newly restored Elizabeth Fort just off Barrack Street was impressive and made a great setting for one of the stages. Writers don't always make good readers but Barry is one of the best readers I've heard. I also enjoyed Conal Creedon's yarn which included a reference to a review Barry had penned of Joe Mac and the Dixies at the Silver Springs which appeared in the Examiner.


Writers reading on medieval ramparts, a bridge merged with a drum kit, and Verdi pared down to the essentials were among the highlights on the final Saturday as Cork Midsummer celebrated a 20 year milestone with a festival true to the original ‘Sense of Cork’ spirit.

After a run of boundary pushing productions at the Everyman, Cork Operatic Society was down but not out returning to the Opera House with a concert performance of La Traviata.

There was a sense of anticipation and pride in the local legacy in the air in the foyer of the capacity house. Without the distractions of staging, the evening relied heavily on the strength of the work and the quality of three main voices.

To judge by the alacrity with which the audience rose to their feet at the close, this production was a triumph.
Leading a strong cast and chorus, Cork mezzo soprano Majella Cullagh wrung every ounce of pathos from her role as a worldly-wise courtesan, Violetta. The brightness of her first act coloratura softened in Act 2 to give some of the most tender moments in her duets with English baritone, Julian Tovey as Germont Senior.
Korean tenor Jung Soo Yun’s also heard in Faust last year was an ardent, clear voiced Alfredo.
Among the supporting roles, Emma Nash and Brendan Collins impressed in their cameo roles. Under director John O’Brien and leader Alan Smale, the 23 piece orchestra played with precision and style. Macdara Ó Searadáin’s haunting clarinet lines and string pianissimos in the instrumental preludes were enthralling.

Earlier and for a much younger audience, there was a soothing simplicity in a charming theatre show, Blátha Bána with an ethereal soundtrack by Fiona Kelleher at Graffiti Theatre Co’s HQ in Blackpool.

The natural percussion of flowing water and the metal bars of a city bridge were incorporated into Alex Petcu’s drum kit in one of three site specific pieces by Tom Lane. Children in the audience lining the Mardyke Bridge jumped in the air with the drummer enhancing the good vibrations under our feet.

A memorable and marvellous day!
Posted by Cathy Desmond at 11:24 AM