Paris based pianist  Ivan Ilić as been a regular visitor to Ireland performing frequently at venues around the country. He opened the Crawford lunchtime series last month and returns to Cork tonight to play in Kilworth at the North Cork Classical Music Festival. I finally heard him live for the first time yesterday at a  lunchtime recital  the John Field Room. 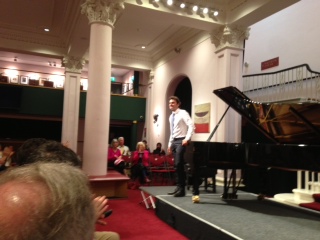 This was extremely satisfying lunchtime fare of rare treats.  The programme was nicely balanced, a set of lighthearted variations and a rondo  set against the cool rigour of half a dozen of Reicha's fugues  'softened'with a pair of Chopin nocturnes.  Tandeln translates as 'dilly dallying', an unlikely verb to juxtapose with  Beethoven. The playing was clean and  graceful -free of any histrionics or unnecessary barvura effects. Ilić drew the threads of the programme together in clearly enunciated, insightful spoken  introductions painting a picture of a cheerful youthful Beethoven in  pleasant contrast to the more familiar  dour image.   Reicha and Beethoven we learned  were friends who met as teenagers in an ensemble conducted by Reicha's father.  Later, both were students of maths and philosophy and rivals in composition

Many artists choose to let the music speak for itself. It adds a depth  when the artist personally sets the context and Ilic had an  engaging and relaxed podium presence.  Furthermore in bidding adieu, he invited the audience to linger and chat to him, a gracious postlude to the procedings. Catch him if you can.