A Tsunami of Black Porter and a Skip Full of Blaas

Thanks to John Cloono for this colourful report on the Booze Blaas and Banter. I am proud to have been included on the bill for this annual event 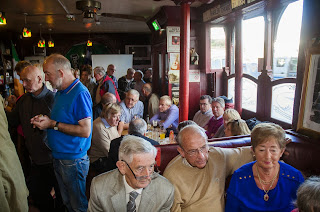 The crackling of sizzling sausages blended with the pleasant aroma from Jack Molloy's spicy breakfast beverages as early house punters gathered around the side door of Jordan's Pub, at Waterford's Quay's on Saturday 25th. last for the 2014 Booze,Blaas N' Banter gig.  A wisp of light white smoke rose gently from Jordan's beer garden,where Peter and Noel Atkins prepared the culinary delights which awaited the restless,gathering crowd.  City gulls crossed from the river to view the proceedings as other avian scavengers flew in and watched for any easy pickings, from atop Greyfrairs and The French Church.
Within seconds of the doors opening at exactly 9am, pints were being pulled and corks softened on large bottles from the shelf and cooler. Balls of white flour from Michael and Dermot Walsh's bakehouse caressed the results of the Atkins brothers labours, but now embellished with a wonderfully flavoured aromatic sauce, specially blended by Waterford's answer to the ' Roux Brothers ' or Hairy Bikers.  These warm blaas  and their savoury fillings, which passed around the bar, were quickly consumed by the hungry early morning revellers, some who claimed to have been on half rations since the previous Thursday. Pat Galvin on box and Tom Casey on banjo are quickly into their stride as the crowd settle in for a few hours of Booze,Blaas N' Banter.
By 9.30am local journalist, renaissance man and MC for the event, Ciaran Murphy,formally gets proceedings under way. Those in attendance were regaled with stories of Olde Waterford, Redmondism and Ballybricken,The Glass Factory, The Larkin Tapestry,  The Clyde Shipping Co. River Craft and Navigation as well as the Fenor Melee and 1922-1923 Farm Labourers Strike.  Dermot Power sang ' The Black Leg Miner ' docker, Dyksie Walsh gave us ' Don't Forget Your Shovel' and other Christy Moore songs. Paul Dillon played guitar and elevated us to an other dimension, whilst Cathy Desmond played Lilly Marlane and 'She through the Fair' on a magic fiddle.  Mathew Roche recited Oliver Goldsmith and Johnathan Swift whilst Louis Quinlan read from his punk poet repertoire.  Marcus and Michael Power covered anti-war and love poems and in a rip-roaring, Agi-Prop critique of Kenny's Government, Joan Burton and water tax, Konor Halpin, had the crowd roaring ' Can't Pay,Won't Pay - Water Charges, No Way ', a cacophony of sound that surely echoed all the way to the Fine Gael offices on Ballybricken.
By One O'clock,a fleet of taxi's were ferrying some of the early revellers home to their beds,whilst hardier souls retreated to the beer garden, where an informal session had started. All through the morning an overflowing crowd enjoyed their drinks and Baccy,in the late Autumn sun in front of the Central Hall, in a scene reminiscent of Hogarth's Gin Lane.  Andy Jordan agreed with the crowd that "this was the best Booze,Blaas N' Banter to date" and that apart from Blaas "there was a tsunami of black porter consumed".
The event was organised by the Waterford Council of Trade Unions as part of the Imagine Festival. The WCTU wish to thank all the readers and performers as well as all who contributed to insuring the event was a success.
Ends.
JC, for the organising committee.
John Power,has pics. johnpowerphotography@gmail.com 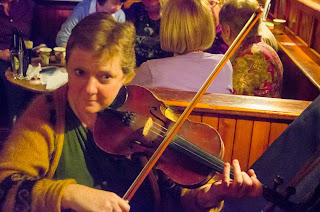