Literary Star in the Blackwater: Theroux at Immrama 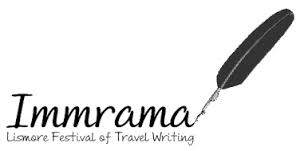 Literary festivals seem to be popping up all over the event map these days. Ennis is home to the lively Book Club Festival now firmly established on the Festival calendar, Lismore, a beautiful riverside village in County Waterford seems to have chosen wisely  in exploring a  tributary  with a niche festival dedicated entirely to travel writing, Immrama, established there  in the last ten years. It was quite a coup for the organizers to tempt big fish of the genre, American Paul Theroux to the Blackwater valley for this year's festival and it was  with some sense of expectation that  I made the trip to hear him talk about his work and travels.

Opening with words of tribute to Dervla Murphy, local doyenne of the genre, Theroux came over as sincere and thoughtful and genuine in his attempt to engage and connect with the reader  in his telling of tales from the road and his time living abroad in Africa .  He had flown to Belfast intending to travel by train to Waterford but his plan was literally derailed  as the train line to West Waterford has been closed for many years forcing him to travel by the more mundane means of a hired car.  In parallel,  a  number of unfortunate aspects  combined to make the event somewhat less than sparkling .


The venue. It is difficult for even the most gifted communicator to have an intimate interactive chat  to a group of 500 in a school gym hall. Particularly when placed on a dais with a woodland floral backdrop that looks like it might engulf him up at any moment or at the very least produce some small woodland creature to cause a diversion. Add to that, the listeners are sitting on the most uncomfortable plastic chairs known to us all from our  schooldays  and you get my drift. Theroux addressing the crowd directly without the aid of an interviewer, did his best, occasionally throwing out questions to gauge the potential resonance of his words with the audience but it didn't flow for me somehow. 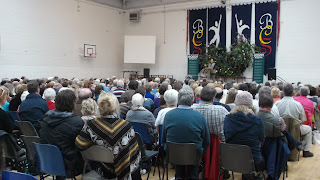 The sound  The amplification was not good. Portable speakers extended half way down the hall but were less than effective from where I was sitting at the back of audience. It was loud  but not sharp enough and  the result was a cloudy obscured impression of the author that was unsatisfactory particularly for a high priced, ticketed event .

Ticket Price:  €25 was expensive for a solo artist for an hour long discourse at a festival receiving public funding and sponsorship. Add in the purchase of a book at the sponsor's stand (Easons) and you didn't have  much change from €40 per head. Generally speaking, arts centres and promoters have kept prices down and there is amazing value to be had at arts events but this wasn't good value by any standard.

The literary events were spaced out over 4 days and with the next event still some way off, we decided to call it a day at Immrama.

http://cathydesmond.blogspot.de/2011/06/blogging-at-immrama.html
Posted by Cathy Desmond at 2:50 AM