The Fellowship of the String: London Fiddle Convention 2013

'We shall do what fiddle players do best which is  improvise and think on our feet' .   So said tutor,  Pete Cooper before launching  his solo set with tunes from Playford's collection  and some unusual  fiddle singing at the London Fiddle Convention I made my way to Camden Town last weekend  for the 21st annual gathering of fiddle folk, held  at Cecil Sharp House, the headquarters of the English Dance and Folk Song Society.


The  venue with its small  basement cafe & bar and  assorted meeting rooms has an austere but convivial air of a  youth hostel.
The format was  an afternoon and evening of workshops, informal jam sessions, a fiddle contest and finally a showcase concert to finish . There were three anchor tutors (sadly Ivor Ottley wasn't in the line up as expected)   Chris Haigh is  a self confessed plunderer of other musical traditions and his well researched trawl through Hungarian folk music was entertaining and informative . Veteran bluegrass fiddler Bob Winquist took us through the old timey, Roxanne's Waltz .  It is always interesting to see how teachers approach the group lesson experience and the shared experience of playing  tunes with a whiff of far flung places was fun.

I met lots of interesting folk  and you can hear some of the voices  in the audioboos. Mandolin player  Ray Tassie manned the stand of attractive  fiddle books many of them by the tutors. Richard Roberts of Sonic  Violins had a steady stream of visitors  Fiddlers who want to sound like a cello?- Richard had a solution- the amazing Octave Violin   Under the stairs, veteran banjo and fiddle player  of the New Lost City Ramblers, Tom Paley had set out his stall of antique fiddles before heading off to play in the jam session in the bar where I met Kate of the Wagon Tales Bluegrass Band and  admired Ben's fold away  bass.
Flame haired Elizabeth Flett from Dundee was a worthy winner of  a surprisingly small pool of teenagers. Her rendition of a Scottish air displayed a very mature style. Youngest contestant was Billy Hill and  I met both Billy and his mother who featured in this recent  Guardian article  I enjoyed David Protheroe's performance  of the Butterfly and he spoke to me about the pleasure of coming lately to a whole new world of fiddle playing outside the orchestral sphere.

Winner of the senior contest was Henry  Webster. What, I asked Henry, were the defining characterics of the English tradition.  ' It's got to have bells on' he said. 'It's all about getting the foot stomping - getting the lift' said Henry and I cheered inwardly to hear his succinct  summary, refreshingly down to earth and free of any guff about tapping the ancient secrets of the universe  through gut strings that tends to be a feature of  any 21st century  folk blurb  I read these days.

A group barn dance by all the participants ushered in the evening concert featuring an eclectic set of turns.  Outside of Sweden, only in London could you imagine a group devoted to an obscure instrument  like the Swedish nyckelharpa . Described as a keyed fiddle with 4 main and 12 sympathetic strings, it is  played with a small  bow . There were turns from the three tutors backed by Ben Somers on his compact bass and Richard Bolton on cello.  Perhaps most extraordinary were the duo Ricardo Marek Czureja  and son Benjamin, The Romany Diamonds. In  a varied set of amazing virtuosity and comedy,at times sounding like Grappelli and Reinhardt and if that wasn't enough, they added  vocals as well. There was a song also from Old Time fiddler  Robin Gillan. The  sad tale of an accidental shooting of a beloved  might have been chosen with recent events in mind . The Clare fiddle style had an excellent champion in Matt Tighe, a student of Dermot Crehan ,a London based member of the legendary Crehan clan. 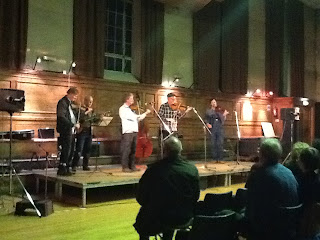 If the event was missing anything, it was  feet. The main Hall of Cecil  Sharp House is an enormous high ceilinged   brightly lit space presided over by rather stern looking door stewards. Lined with a high bank of seating, it lends itself more to hordes of dancing feet than a  resonant listening experience. I enjoyed the range and variety of styles and  the sense of collegiality among the participants.

'We've had a lovely day' said Pete Cooper and indeed we did !  Looking forward to the next one. I'm off to practice my czardas!

Thanks to Richard Roberts of  Sonic Violins for facilitating my participation with the loan of a violin for the day .


listen to ‘Piotr ’ on Audioboo