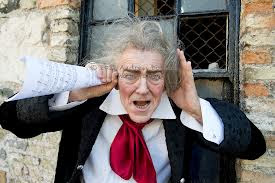 Music for Galway presented an impressive  pool of international artists in a weekend of celebration of the life and works of Beethoven. But It wasn't the promise of 'Genius' or 'Passion' that had me  bound  for the last event  titled 'The Pulse of an Irishman' at the Town Hall Theatre. Nothing out of the ordinary there as concert programmes go  but rather the words Beethoven and Irish on the same line of the mini festival's title, Beethoven : Genius, Passion &the Irish Connection .  Not something you see too often. 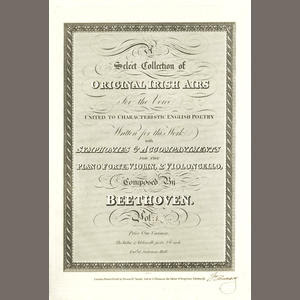 The afternoon concert opened with some chamber music. Rebecca Cápóva delivered Eleven Bagatelles Opus 119 with precision and verve and  we heard a fine rendition of the  Ghost Trio played by the Osiris Piano Trio from the Netherlands.  So far , so continental. The Irish connection came after the interval in the form of a set of songs and a dramatic reading of Beethoven's letters in translations by a local Galway academic, Emily Anderson  Although Thomas Moore is generally accepted to have been the major player in bringing  Irish songs to a world wide audience, I was surprised to learn that the Teutonic titan  had a significant part in improving our cultural image in 19th century Europe when he accepted a commission to arrange  a collection of Irish airs from George Thomson, of the Scottish Board of Encouragement of the Arts. In a talk  'Beethoven and Ireland' , given to Radio Eirinn in 1947 John Hennig reports that it was actually poet Robbie Burns, one of a dozen poets engaged to provide lyrics, who pointed out that many of the melodies were in fact Irish and persuaded Thomson they would be more 'saleable' marketed as such .   A sum of £100 was agreed for Beethoven to extend his work on a set of Scottish airs and duly  in 1814 'A Select Collection of Irish Airs for the Voice united to characteristic English Poetry written for this work with Symphonies and Accompaniments for the pianoforte, violin and violoncello composed by Beethoven' was published in Edinburgh.  Beethoven must have seen a European market for them as Hennig tells us  he reserved the European publishing rights for himself. Although Beethoven requested the words so he could 'effect the correct expression' but he did not have them to hand when composing the accompaniments which seems extraordinary ..

Och! I have you not heard, Pat, of many a joke

Judging by the ten songs we heard on Sunday afternoon, it seems 'The Pulse of an Irishman' as any  showband musician will tell you beats most often  in triple time.Some of the melodies were  familiar from settings by Moore and popular folk songs . The melody for  Oh My Dear Dermot was  that of Moore's Avenging and Bright  and  the lively tune of  Bhios La PortLairge turns up  unexpectedly in He Promises Me at Parting. The humour and rhythm of English Bull reminded me of  a Percy French   or even Gilbert & Sullivan number, the genteel drawing room lyrics playful and at times sentimental.  The vocal delivery of soprano Patricia Reidijk (looking splendid in red taffeta)   didn't quite match the frivolity of the lyrics of the opening  Elfin Fairies  and she was at her best in the more wistful numbers.  BBC New Generation Artist, Robin Tritschler's style seemed effortless and nicely understated , no more so than on No More My Mary. Like  delicious sweets I felt a twinge of regret when the song set  was all unwrapped  and felt I could have enjoyed a few more which is not exactly the emotion I felt  when I last got to the end of the 9th Symphony. What sets the songs  apart from the Moore arrangements are the elegant and sophisticated violin and cello lines. It seems the complexity of the arrangements was the subject of some argument between the composer and commissioner but Thomson seems to have been very happy with the collaboration and had this to say in the preface

'If Carolan the Irish Bard would raise his head and hear his own melodies sung with Beethoven's accompaniments,  he would idolise the artist who could produce such exquisitely coloured and highly finished pictures  This is flattering to the melodies of Ireland and will be received no less favourably '

The proceedings opened with a presentation of a commissioned sculpture by John Behan to the outgoing artistic director of Music for Galway, composer Jane O Leary for her dedication over 32 years to the society. There are not many artistic communities who claim have such  continuity in their stewardship. Pianist Finghin Collins is to take over as new artistic director and we wish him well in the role.

Who we met : Pianist Jan Cap had travelled from Cork to support his daughter Rebecca.. We met Pádhraig Campbell,  environmental campaigner in the very spacious and elegant cafe space upstairs. Cellist Adrian Mantu updated me on the Con Tempo's next engagement in Headford on Thurs. I had a chat with Robin Tritschler who spoke about the exciting  opportunities to perform unusual repertoire that were coming his way by virtue of being a BBC New Generation Artist.  Britten's Illuminations and  a teenage work Quatre Chansons Francaises are in the pipeline. We met  board member Ludmilla Snigireva  and Executive Officer, Anna Lardi Fogarty of the MfG committee who was clearly delighted with the weekend and  busy wrapping up the formalities and bidding adieu to the the festival goers in the foyer. We liked  the  afternoon time slot making it possible to travel to and from Galway by bus during daylight hours.


.@fidleir got paid a lot more for those songs than @royalphilsoc gave me for me Ninth Symphony ;-)
— Beethoven Bust (@Beethoven_Bust) January 30, 2013

They bid me slight my Dermot dear (duet
Oh! would I were but that sweet linnet (duet)
English Bulls
Oh Who My Dear Dermot
He promised me at parting (duet)
The Hero May Perish
By the Side of the Shannon


Related Articles 'Listen to This' Author at Galway Arts Festival